I took Monday and Tuesday off work to spend some time with Tyler, and recover from singing comps. Luckily the weather was pretty good, so we got to run around outside playing ball-tag and laughing ourselves silly. Chris rang from Sydney on Tuesday - they won their first game so all good. Home-boy that he is, he is already looking forward to coming home :)
I finally organised for the piano-tuner to come and sort out the piano. And there goes my prize-winnings from the weekend! (and then some). Currently it is a mere shell, with all it's innards in his workshop and not likely to be back for about 2 weeks. However when it is all done, it will be restored to it's not inconsiderable former glory. He tells me that it is a very very good quality piano and in original condition in the sense that no-one has mucked about with it and added unwarranted bits and pieces. Once he's finished I'll get it professionally polished and the old girl will be a sight to behold and hear. Yay - no more sticking B clashing with B flats.:)
Tyler spent the day at the OSCAR holiday programme and had a great time. He's also there tomorrow. I think he's missing his Daddy as all his drawings are of or about him. Friday I have another day off work and we are heading up to Dunedin for the night and to visit my friend who has a new addition to the family who we have not yet met. We are staying at a Holiday Park that Tyler loves because it has an indoor swimming pool. He doesn't know that yet, so it will a lovely wee surprise for him.
The stoopid photo thingy is still not working, sorry. I'm going to go and have a whinge at the Blogspot people.
Posted by BellaDiva at 19:58 No comments:

Tyler (singing):
Baa baa black sheep
Any any wool?
Bless you, bless you,
Never wanna fall
Me: What are those words?
Tyler: Duh! Those are the words of the song!
Me: Ohhkaaay.﻿
I was going to put some photos here but the photo uploader has been changed and now isn't working, grrr.
Posted by BellaDiva at 21:47 No comments:

Competitions day - morning session complete. Two wins from 2 classes! Operatic Aria and French Art Song. With a special thanks for 'such a beautiful Clair de Lune' from the adjudicator.
Four classes this afternoon - 2 of which have a high potential for disaster :) Updates to come.

UPDATE 5pm: No results yet as they were running late and I had to nip home to feed the kiddies. However, Oratorio was so-so (with one glaring error), Comic was great so hoping to place in that, own Selection was a disaster and Duet was ok, despite some probs with the piano accommpaniment. Voice is very ragged, so I may not do Lieder class and just give up the remains of my vocal chords to the Scholarship class. Back later......

UPDATE 10am Sunday: Didn't update last night, too tired and quite frankly I was bummed out. Came second in the scholarship, basically because I made some errors in the timing of a couple of entries in the test piece. Technically it was fine. And 'Let the Bright Seraphim' rocked! But thems the breaks. It's what happens on the day. I even pulled out of the Lieder class so I could give it everything in the scholarship. I did end up with a first in the Comic, so I'm very happy with that. And despite what I felt was a disastrous 'Rejoice Greatly' in the Own Selection class, I came 3rd. Haven't seen the adjuicator's report on that yet, and I'm curious to know what it says!

Feeling a bit jaded this morning, which is the norm. There are a couple of classes this afternoon which I'm not in, so I can go along and just relax and enjoy other people's singing. Not to mention I can listen to CD's other than those of the songs I've been rehearsing!

Sorry it's been all me me me meeeee! Normal Tyler and family updates will resume shortly :)
Posted by BellaDiva at 13:03 No comments:

After the last lot of pictures it snowed steadily and heavily for another couple of hours. We stayed snug and warm inside (although of course no SKY) until it stopped snowing and the sun burst out. Tyler made his first snowman, all his own work except for the mouth which I made with a small piece of rhubarab from the garden. 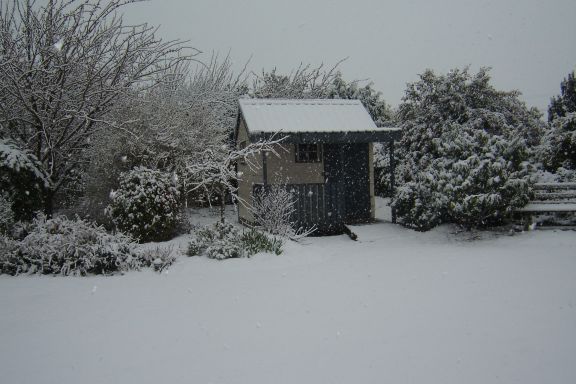 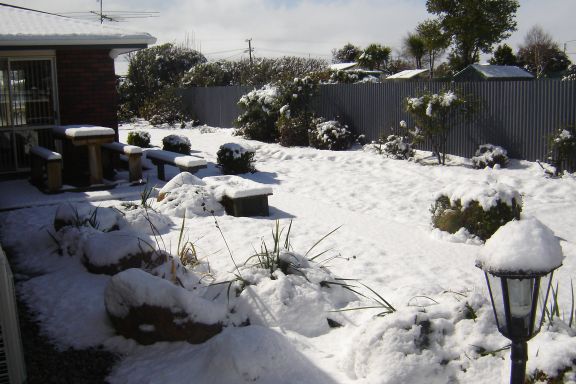 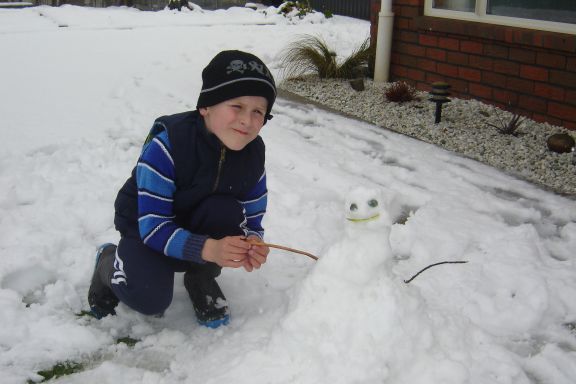 Posted by BellaDiva at 15:16 No comments:

Email ThisBlogThis!Share to TwitterShare to FacebookShare to Pinterest
Labels: Snow

...how cold my toes (tiddlypom) are growing. Yes and other bits of me too as soon as I step outside the door. The snow is falling thick and fast.  It's a winter wonderland out there - in Spring. Here are a couple of pics from earlier this morning when the snow was only light. I'm about to pop outside to take some more - you'll see the difference and hour of snowing makes. 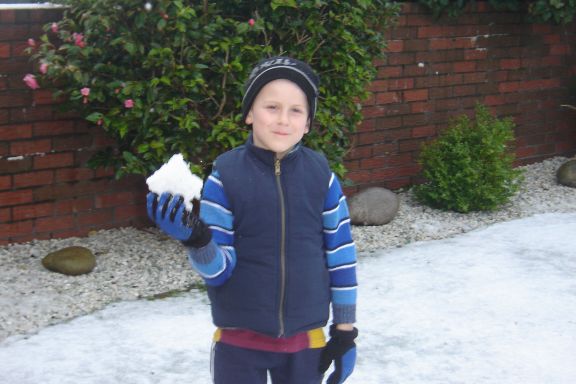 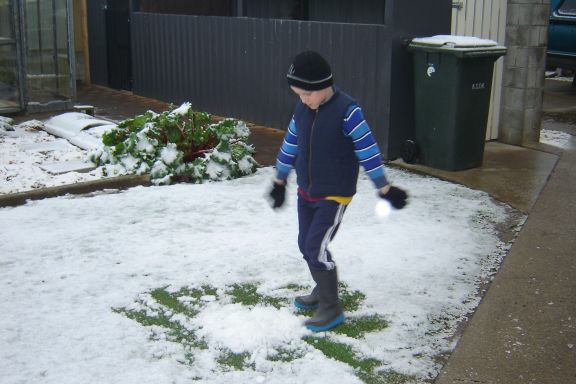 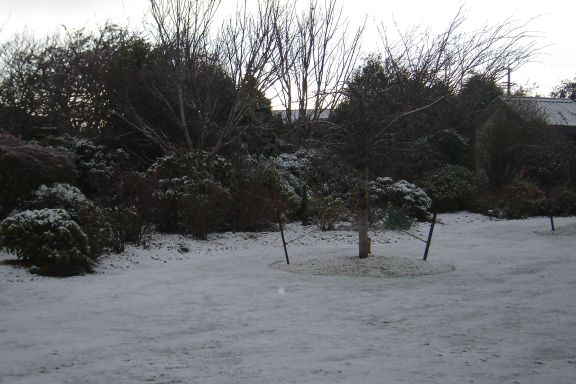 Posted by BellaDiva at 10:34 No comments:

Email ThisBlogThis!Share to TwitterShare to FacebookShare to Pinterest
Labels: Snow

Finally some house photos. A lovely day today here in Invervegas. Chris has done a heap of work on the garden - unfortunately we didn't take any 'before' photos. Anyway here are a few:

This is my equivalent of Chris' 'man-cave'. It has the computer, piano and finally a bookshelf to hold all my music. 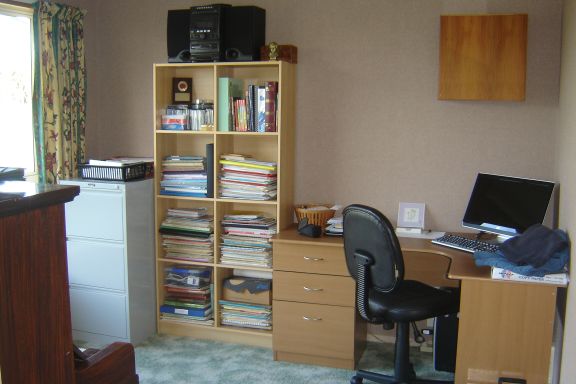 This is the main lounge 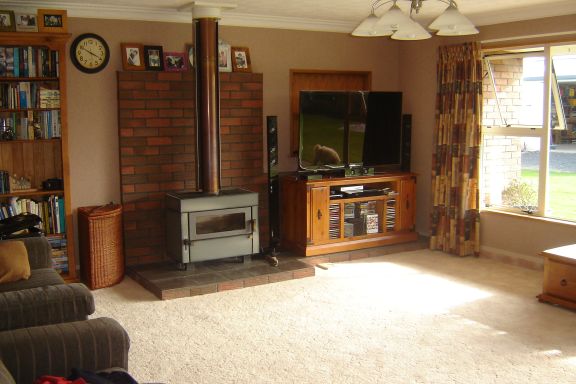 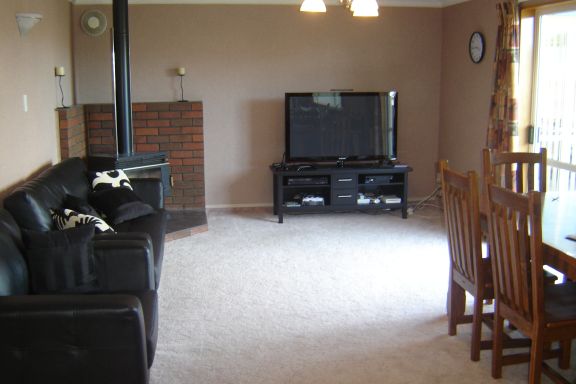 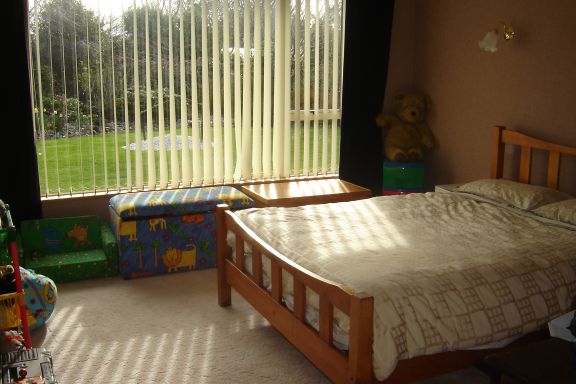 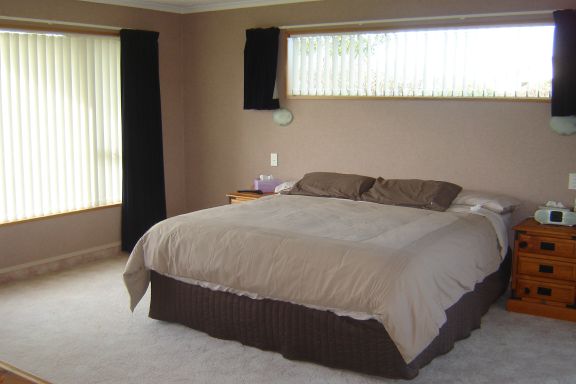 Our room again, looking towards the ensuite 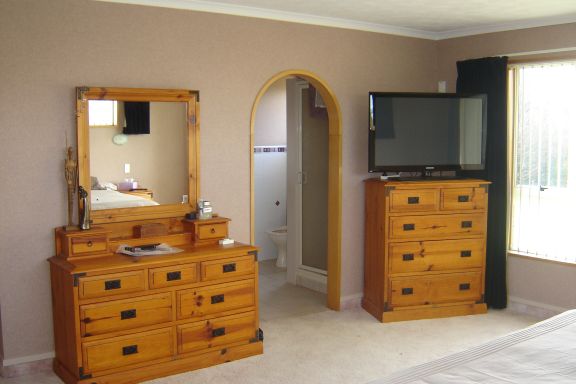 The towel stand. I'm showing this because it makes me feel flash :) 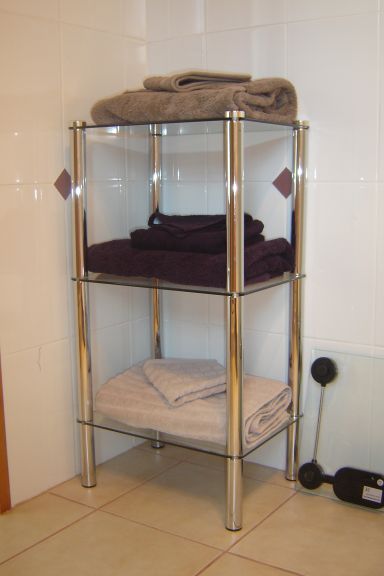 Outside facing the lounge, Tyler and Pedro enjoying the sun 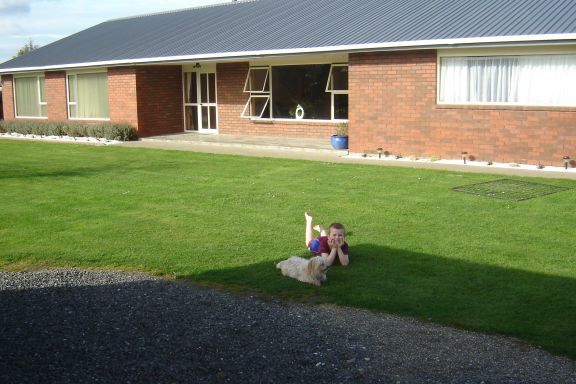 Some of Chris' handiwork  - this time with Tigger enjoying the sun 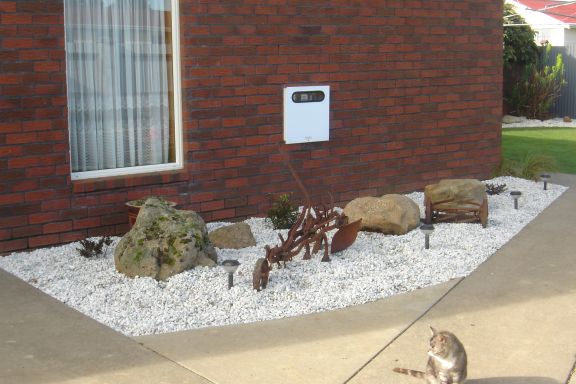 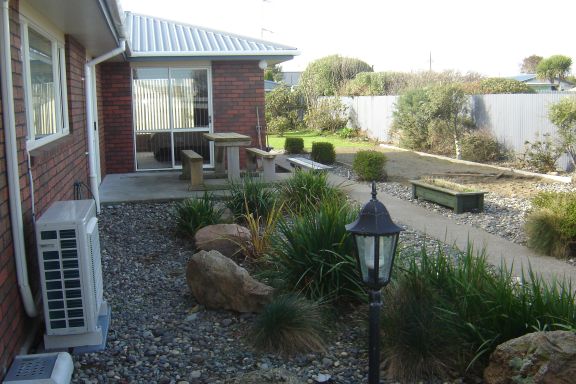 And here is Tyler reading in bed 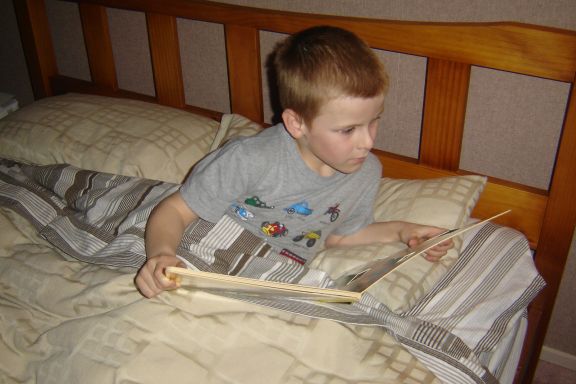 Posted by BellaDiva at 16:33 No comments:

Yes, it's been 3 weeks since my last confession post. I have not yet taken photos of the new house, but finally I have a relatively free weekend ahead and so I promise I will! Especially as Chris has been buried in the garden (no I haven't bumped him off for the insurance) and has been weeding, digging up, tearing down, and beautifying.
The house is pretty much set up now, and we are revelling in the leg/arm/body room of a new Superking-size bed. I no longer end up shaped like a pretzel if the wee dude pops in for a snuggle in the mornings.
The A Capella concert last Sunday went very well. It was great having the power of 70ish voices for the massed items (March of the Hebrew Slaves and Hail Gladdening Light). I was a busy wee bee as not only was I singing the normal choir stuff, but played a flute obligato for one item and then had a solo item of my own. I performed the Flanders & Swan song 'A Word on My Ear' about a tone-deaf soprano and the audience response was all a performer could wish for. At one point I lost the plot with the words but handled it in a such a way that the audience thought it was actually part of the performance. Not often that will work :)
Tyler continues to do well at school, and his reading is coming along really well, even though he declares "I hate reading!" (usually because instead of doing his reading homework he'd rather be kicking a ball around or playing with his toys). He is a very snuggly/huggy/kissy wee lad and I fervantly hope this will always be so.
Posted by BellaDiva at 12:16 No comments: