Yesterday we headed out to Colac Bay for lunch with our friends PJ and Steph at PJ's Dad's crib. It's a great crib, the epitome of the typical NZ crib of the good old days (oh heck I've started doing that "In my day..." thing!). The weather was beautiful so we took their dogs for a walk along the beach and collected mussels (max 25 per person of course). Chris later steamed these and served them in a broth as an appetiser for tea. Naturally I did not partake and Tyler took a small taste and wrinkled his nose up. Tyler also got to ride a boogie board for the first time. PJ ran along the edge of the surf, towing him along behind. He canned off a couple of times but was unfazed. I forgot take the camera dang it.
Posted by BellaDiva at 14:36 No comments:

It's Boxing Day and we are still feeling a little tired after yesterday's traipsing around. We started the day at about 7am with Tyler opening his Santa sack, then we opened the presents under the tree followed by breakfast - croissants, pancakes with maple syrup and strawberries. Then off to Te Anau for Christmas lunch at Bruce and Ali's with Chris' sister Leona, partner Dave and two of the kids, Annabel and Jason there as well. We stuffed ourselves with BBQ meats and seafood, new potatoes, salads and wonderful puddings.
Tyler was eager to have a ride on Mate, Bruce's horse so we all trooped outside and everything was going well until Annabel lost her balance slightly when getting on and accidentally gave Mate a nudge with her foot on his rump which made him jump forward and swing round, unseating Annabel. It quickly became clear that her wrist was probably broken so a trip to the medical center was organised, by which time we had to head for Invers in order to make it back in time for tea at my Mum's with the my side of the family.

Present opening was followed by another delicious meal of turkey, ham, crayfish salads and Mum's fabulous plum duff with custard and cream (and the odd glass of wine), and finished off with the opening of Mum's home-made crackers, all tailored to the specific person.

By that time, we were exhausted (Chris especially, having not yet caught up on his sleep from previous night shift) so we headed home to get some much-needed sleep.

Tyler with some of his new toys 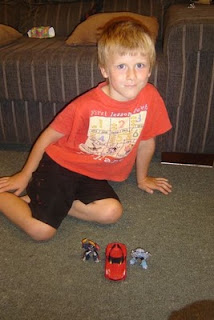 What could be better? A half-naked chef in the kitchen,
whipping up a pasta salad 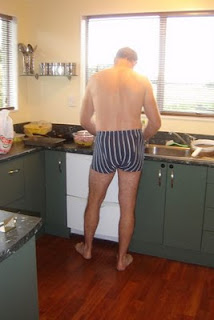 At Bruce and Ali's for Christmas lunch -
Tyler, Annabel, Jason and Chris 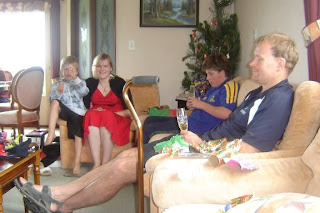 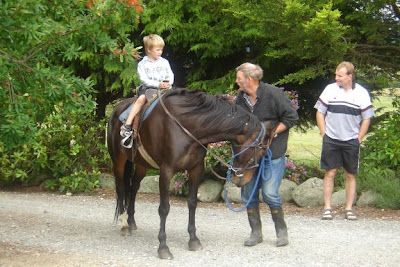 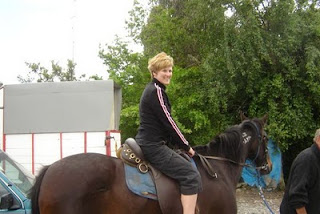 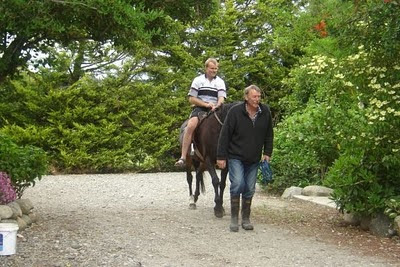 Posted by BellaDiva at 14:32 No comments: 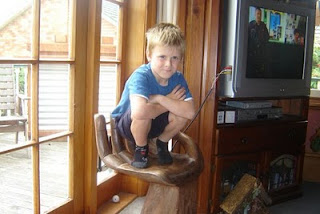 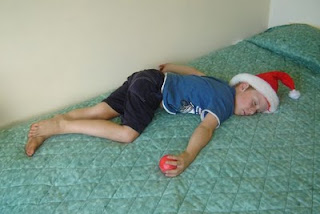 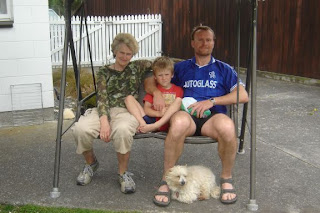 We're on the countdown to Christmas and feeling tired and frazzled like most people. We had a quick trip north to catch up with Leona and Dave, Rosina and Dad & Jan before Christmas.  Pedro went with us and travelled very well.

My broken rib (touch) is healing well, although an unanticipated sneeze can send me through the roof!  Tyler as finished school for the year and I finish on the 23rd and don't go back to work until the 18th of January.
Posted by BellaDiva at 21:20 No comments: