Tyler had his first real time away from us recently. First he spent a couple of nights at Pop's - and I don't know which one was more tired by the end :) Here is Tyler, decimating the rabbit population of Te Anau by one. 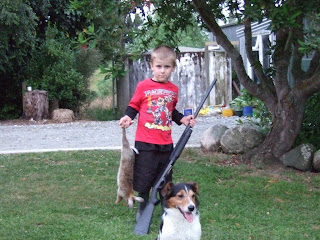 Then he spent a long weekend with Aunty Leona (or Aunty Alona as he calls her) in Oamaru while Chris and I went to the NZ Masters Games in Dunedin. Chris played touch and got a gold medal and a silver, and I played netball and had a lot of  fun with the girls.

Tyler is back at school with a new teacher who is very good. He starts playing touch tomorrow for the 'Sacred Heart Stars'. Hopefully he has his father's sporting genes and not mine! Chris is training for the NZ Touch Nationals at the beginning of March. He was asked to play for the Otago Mens' 40's team.

I have started singing lessons with Rebecca Ryan.Already I am doing things I never thought possible (a top C sharp without straining!) I have decided to really focus on my singing this year and Rebecca is getting me working on an item from each major genre eg Oratorio - Rejoice Greatly O Daughter of Zion,  Aria - O Mio Babbino Caro,  French song - Les Filles Aux Cadiz and so on.
Posted by BellaDiva at 19:42 No comments: