A fireman! Tyler's class is working through the Firewise programme so he was very excited
when they had a visit from some firemen with their fire engine. 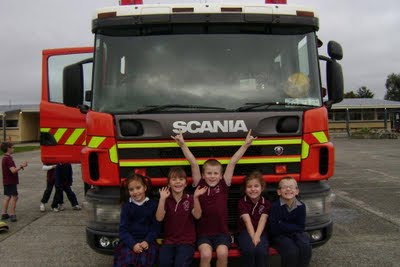 Posted by BellaDiva at 19:03 No comments:

So it was two weeks of full on rehearsals and performances and then.....nothing. No.Thing. After the last Hansel & Gretel (H&G) performance I looked at the family diary and for the week ahead there was nothing. Well no that's no quite true, we did have the A Capella Singers AGM but that doesn't count :)
H&G went really well and I loved it!! I even managed to add my own little spin onto a little bit of the Dew Fairy's dialogue and the director was hugely delighted as he had been encouraging me to add my own take on the characters I was playing. I didn't trip over my cloak, and I think I sang pretty well. Apart from the last performance where I had to do a 'Milli Vanilli'. I'd had a slight sniffle all week but it was no impediment to singing. However I woke up on the Saturday morning sounding like a strangled chicken! Application of a recommended gargle (warm water, salt, baking soda and maple syrup) failed to un-strangle the chicken and so I mimed and acted my two roles while the amazing Amanda Winfield sang from the wings, miked forward so it sounded like it was coming from me. She'd never sung those parts before, only heard me sing them. Not only that but because she was already playing two roles herself (mother and witch) she had to rearrange her costume changes to accommodate me. And she just took it in her stride. That's a professional for you. Oh and I wasn't as bad as the notorious Milli Vanilli duo, as the director advised the audience prior to the show beginning.
And so this Saturday morning I was able to have lie in, then amble up to the kitchen in my fluffy pink dressing-gown to make a cup of coffee in my favourite mug (no-one else is allowed to use it) read the paper and do the word puzzles. 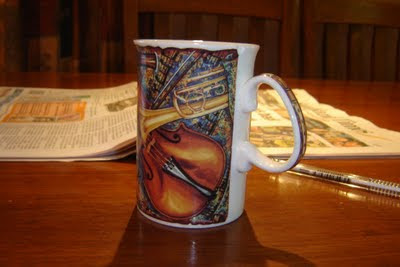 Posted by BellaDiva at 11:03 No comments: