Tyler had a lovely day for his birthday on Friday. We waited for Chris to come home from nightshift and then T opened his presents and we had breakfast together. The Star Wars light-sabre went down a treat so we now have the constant sound of zzzzhhooom zzzzhhooom as Tyler swishes the sabre through the air, fighting Darth Vader. He then went to daycare where he got to wear the special birthday hat and all the kids sang happy birthday to him.

Yesterday we had his party at Chipmunks. Party guests were Luke and Angelina from daycare, Ella, Stephen and Rebecca. The kids had a great time running around squealing and laughing and climbing all over the slides and obstacle courses (didn’t they Stephen??! *lol*) and then ate lots of unhealthy food. Charlie Chipmunk bought in Tyler’s birthday cake and we all sang Happy Birthday. The kids carried on running around and the adults sat down for a nice quiet coffee 

Here are a couple of party photos:
Birthday Boy 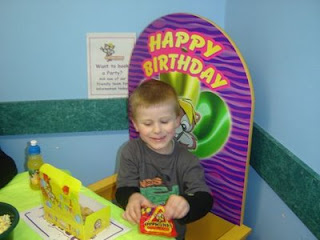 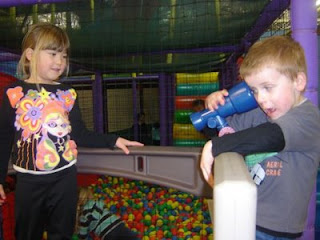 Posted by BellaDiva at 08:49 No comments: 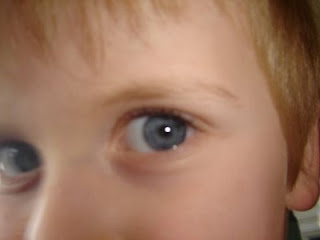 Tyler has discovered how much fun can be had with a camera. His technique needs some work (endless photos of his feet and random bits of ceiling) but he makes up for it with enthusiasm. This photo is one he took himself while investigating the workings of the lens.

Sadness again in the Campbell-McLeod household. I got pregnant again in June and had an early scan which showed a little bean with a heartbeat. Very excited after what happened last time at the first scan. Plans were made for a CVS in Christchurch in August, but on 28 July (ironically the day our other wee bean would have been due) I started bleeding. It settled down for a while but then amped up again, this time with cramping and contractions. A scan revealed that wee bean had died several weeks earlier. My body valiantly tried to miscarry naturally but didn't quite manage it so I ended up in hospital yesterday for another D&C. Heartbreaking, but we will get through it.
Posted by BellaDiva at 14:04 No comments: