Wednesday started non-eventfully and ended with me tucked up in bed feeling very sorry for myself. Just before lunch I was walking down the stairs at work and had just started down the second flight when all of a sudden I was pitching forward, thinking "&#$%, this is going to hurt" and sliding down the remaining steps a bit in the fashion of a Winnie the Pooh being bumped down the stairs by Christopher Robin. I came to a stop at the bottom, having very cleverly managed to land in the recovery position. Very helpful I was. A mental inventory of the painful bits noted a sore neck, head, arm and then increasingly demandingly, left index finger.
Having ascertained that I was conscious and at least vaguely lucid, I was carted off to A&E by Helen, who was most impressed and not a little alarmed by the state of my index finger which had swelled alarmingly and was looking rather skew-whiff. After a surprisingly short wait at A&E I was xrayed to the nth degree and told that luckily nothing was broken, so ice the finger, take this script for codeine and go home and rest. So now I am sporting a spectacular bruise on my arm (see below) about which Tyler said "Ooh I like that Mummy, it's like a rainbow!". My index finger has improved markedly so that I can now completely straighten and partially bend it. And the worst thing about the whole incident? I missed the first touch game of the season, dang it!
Ironically, Tyler was at fracture clinic the next morning having his foot re-checked to see how the bone was mending. Perhaps we should be asking for a family discount :) 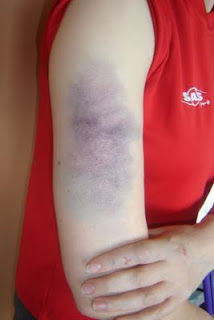 Posted by BellaDiva at 19:08 No comments:

Yesterday Tyler and I went shopping for art supplies for him. We got a kit with paints, crayons, felts etc, a ringbinder with 2 pads, some stickers, a cute wee stapler and a sellotape dispenser. So he is all set to paint and draw and be as artistic as he likes. He is also very much into making concept drawings in chalk on his blackboard, which he explains very carefully to me so that I can 'help' him make or draw them.
Posted by BellaDiva at 09:06 No comments:

Tyler has shown quite an artistic streak lately. Must be from his father as he sure as heck doesn't get it from me! *lol*  He frequently goes pottering around the garden, grabbing leaves, flowers and twigs and then gets busy with paper, paint, sellotape and glue to make his creations. This is what he has made for his cousin Stephen's 16th birthday:
I remember him grabbing the leaf that makes the smile, saying "That will be the mouth" so now I can see what he saw when he looked at the leaf. Our table is littered with paintings and drawings and he's showing no signs of slowing down.
He's had a week of school holidays, spending time variously with Chris, Anton and Stephen (the latter two earning child-minding $ for their efforts). This week he is with Granna, then Chris, then Chris and me and finally just me.
He is going through a self-assertive phase, his most frequent saying seems to be "You're not the boss!" with arms folded defiantly. He has also decided he doesn't like brushing his teeth and that in fact he "hates teeth".
Posted by BellaDiva at 18:43 No comments: