This morning playing Candyland, I won the first game we played. Tyler dropped his lip a bit and I said "Don't worry, you might win the next one, but it's all just luck". "No it's not" he shot back, "it's BAD luck".
Later I asked him if he wanted to come with me to do something and he said "No I've got some business to take care of".
Chris is at work today so T and I had a look at a couple of open homes in town and then visited the Wallacetown school Gala Day where he proceeded to cram as much sugar into his system as he could before Mum's money ran out. They had a lot of arts and crafts stalls there and Tyler asked if we could buy something for Anton's birthday (18th) which is coming up soon. This was proving something of a challenge as 18 y.o. boys don't generally go for crocheted doilies or hand-painted vases but fortunately there was a stall with schoolkids selling chocolate so that solved that one!
Apart from that, we just keep packing. 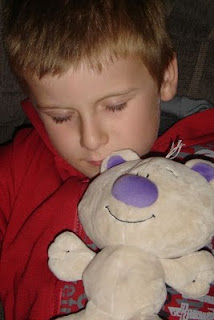 Posted by BellaDiva at 19:03 No comments:

Tyler had school Mass today so that took care of the morning, then I went to a meeting this afternoon to discuss the state of church music in Invercargill. As it is elsewhere, traditional music is being taken over by contemporary music, some of it excellent, but much of it trite and repetitive. We all believe there is still a place for cantors, Pslams, Magnificats etc.

I have been asked to adjudicate a school music festival at a local high school next month. Very nice to be asked but a bit nerve-wracking.

Packing is under way - Chris is much more enthusiastic than I! His idea of packing clothes is to simply upend the contents of his drawers into boxes and then throw the wardrobe contents into another box. Effective but he better not think I'll be ironing the crumpled results!

Posted by BellaDiva at 20:16 No comments:

A big week. Chris' Uncle Ron died last Friday and the funeral was in Arrowtown on Thursday. The night before, Chris' cousin Leanne asked if I would sing. I was coming down with a cold but agreed to do it. We chose 'Somewhere Over the Rainbow' as there had been a big rainbow over Lake Hayes the morning of Ron's passing. It was definitely a sub-standard performance by my standards, but I got some nice feedback so it wasn't too dreadful.
Thursday was my last singing lesson with Rebecca for almost 2 months as she is off to London to sing in a couple of operas. Imagine being able to say, "Oh I'm just popping off to London to sing in a couple of operas, darling". It'll only ever be imagination for me :) We ran through Let the Bright Seraphim, and even though I was full of a head cold, Rebecca says I am ready to perform it, even with a head cold. Wow, this is scary, because I have now committed to singing it at a Womens Club Lunch Hour Concert on 11 June and I am starting to hperventilate a bit! I just have to trust that I can put into practice what she has taught me and get that bright, ringing sound that I AM capable of, and not revert to the 10 y.o. choir boy sound. The music is slightly easier than Rejoice Greatly (only 1 scary run instead of 3) but the tessitura is high and so it's hard to not tense up.
House-wise - still betwixt and between. The &^^$*! Wallacetown people have suddenly decided that would be happy to accept our last offer of $410 but of course we have mentally moved on from there and have resigned ourselves to renting in the short-term. It's all very unsettling and I want to be an ostrich and put my head in the sand. Which is probably why I am doing this and not packing :)

And now for a random photo -Tyler raided the junk bowl on the table and found a motorcycle badge and a very girly sparkly bracelet which he proceeded to wear with panache. 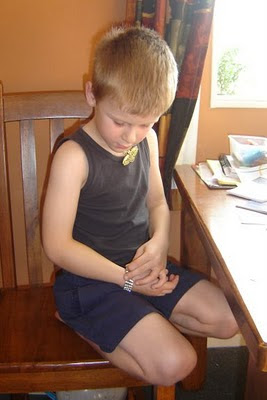 Posted by BellaDiva at 16:11 No comments:

It's the little moments

This afternoon I was downloading some music to my iPod. I had my earbuds in, checking that it was all there and Tyler came over and asked to listen. So I gave him one earbud and he put it in, looked thoughtful and said "I like that" (Dougie Maclean) then put his arms around me and started bopping away.
Later on, I was in the laundry folding Mt Washmore, when I heard the sort of crash thump thump that makes any mother's heart skip a beat. Sure enough there was a loud wail from the lounge. I raced in to find him huddled on the floor, clutching his shin and crying. As I cuddled him I realised he was wearing his t-shirt with the neck part over the front of his chest, thus constraining his arms. Once he had stopped sobbing, I asked him why he had done that and he said "Because I wanted to be Ben 10". Obviously Ben 10 can fly between couches with his arms pinned to his sides.
Posted by BellaDiva at 17:49 No comments:

And still we search. We made a last ditch bid for the Wallacetown property as we were told that the vendors had softened a bit. Ha! Not by enough they hadn't! So....more open-homing and now some serious thought about building. Only 1 month till settlement so we have started packing. Chris' Dad has taken a bunch of farm equipment off our hands, together with the ducks, the chicken, the lamb, the sheep and the goat. I didn't get to say goodbye *sniff*. Only 'Rammy' is left and he is earmarked for the freezer.
Chris made a trip to Dunedin yesterday to visit his Uncle Ron who is sadly nearing the end of his time.
We have been enjoying the days which start with a crisp frost and blossom into blue skies and warmth. Long may they continue.
Posted by BellaDiva at 19:07 No comments:

My first Mothers Day present from Tyler was a neck rub. Then he presented me with the things he had made at school - a card, a bookmark with a poem about mothers on it and a laminated place mat with his photo and a speech balloon saying "I love you Mum". All beautifully wrapped in hand-decorated paper. 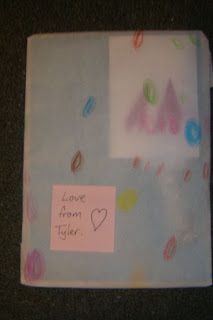 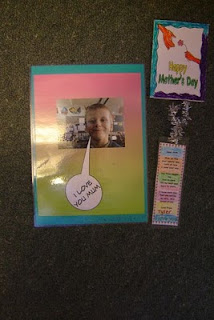 Then he proceeded to beautify me with little sparkly clips. ('scuse the early morning bleary-eyed look) 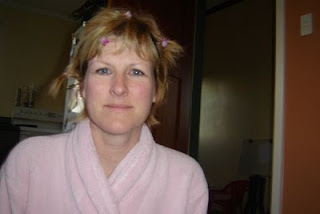 Once Chris got home from night-shift, they presented me with a funny card and two DVD's - Love Actually and Mamma Mia. Later on we had a Mothers' Lunch at the Howard's. 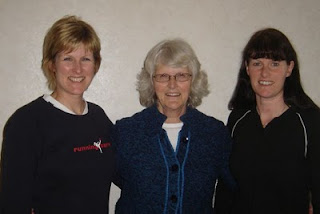 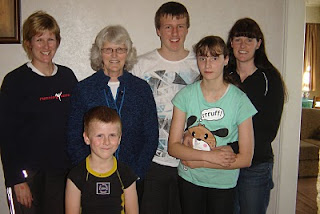 The Three Mums and their kids
Posted by BellaDiva at 18:26 No comments:

Still no home to go to. We have advised the real estate agents for the Wallacetown property we are prepared to make an offer of $400K so we will see if that goes anywhere. In the meantime we have been going to open homes here there and everywhere. I have managed to avoid packing so far, but the time is fast approaching. Time to get ruthless! Which reminds me of a little ditty:
Ruth rode on my motorbike,
Directly back of me,
We took a bend at 95,
And rode on ruthlessly.
There's your Friday Funny :)
Tyler's school had a Wacky Hair Day today. Given that Tyler has a No.2 haircut, there wasn't an awful lot we could do short of buying a wig. He decided all he wanted was to spike his hair up with gel and so that's what we did.
In singing news, I am about to launch myself at 'Let the Bright Seraphim' (the aria Kiri sang at Charles and Diana's wedding). Wish me luck!
Posted by BellaDiva at 19:29 No comments:

Cousin Rebecca had a clean out recently and bequeathed this electronic keyboard to Tyler. He's been having a lot of fun with it. 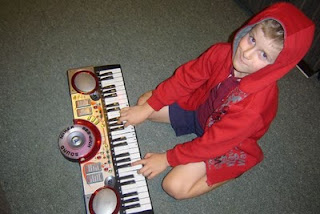 We still haven't found a suitable property to buy (apart from the Wallacetown one grrrr) so it's looking likely that we will end up renting our friend's house for a while.
Posted by BellaDiva at 09:18 No comments: