It's been a long time between posts - Hi Dad! - so I better catch y'all up on the household doings.

Term 1 has finished and Tyler is on holiday. He's had a sleepover at a friend's place and got two Easter Egg Hunts, one on Good Friday at home and then another on Easter Sunday at his friend's. Remarkably he still has quite a bit of his booty left. He has had a couple of days at OSCAR and will spend some days with Chris, some with me and a few with both of us.
He came out with a little gem the other day, as we were snuggled up in bed. "Mum, do you know what a snuggle is? It's a cuddle where you get really comfy together." Couldn't have put it better myself.
Softball season finished on a high for Chris, who is captain of the Wallacetown team which plays in the Premier B division. They won their grade, and Chris played a blinder, with a homer and great fielding. The team also won the Conduct Award and the award for the team with the least runs scored against them.    Rugby starts this weekend (Senior C division, playing for the Hawaiian Delights) as he gets match fit for his big trip to Hawaii in September. My netball starts this weekend although I am not officially playing for the season, just covering the first three or four weeks for one of the girls who's overseas.
I've had plenty of singing with the church choir over Easter and then a funeral I was honoured to be asked to sing at yesterday. At the end of the month I sing the role of Dido in a concert performance of Purcell's 'Dido and Aeneas' as part of the Southland Arts Festival. As usual, details of my singing adventures can be read here.
Here's a couple of pics of the wee dude deep in philosophical discussion with his big bro Anton. Topic of discussion? How to get to the next level on the Pokemon White Nintendo game :) 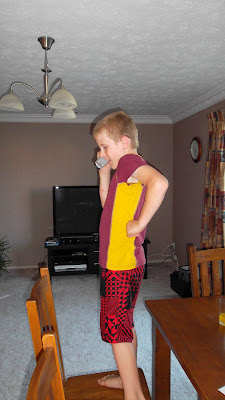 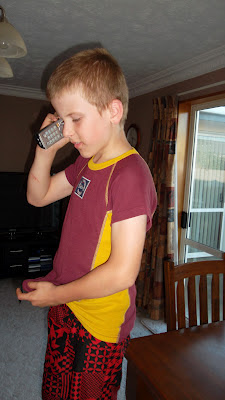