Tyler has started Flippa Ball this term, and his first game was on Friday. Both Chris and I were working so one of his friend's Mum's took him for us. As the game finished before 5pm, the boys went to the wave pool to play while they waited for me to come from work. When I arrived, there was Tyler sitting in a chair by the pool, with the Mum holding and icepack on his head and a towel covered in blood stains on his lap. He had managed to bang his head on the edge of a sidewall drain and being a scalp wound it bled like crazy. We did a precautionary visit to A&E to check for concussion, but they were pretty sure he was fine and after a bit of a cleanup, some panadol and a lollipop, we were on our way home.
Yesterday, he was tootling around on his scooter so I decided to take a video of him. Murphy's Law, he falls off. I'd like to show you the video but it won't load *sigh*. I'm thinking WordPress is going to be a better blog option. Anyway, here's a photo of Mr Cool Skater-Dude. 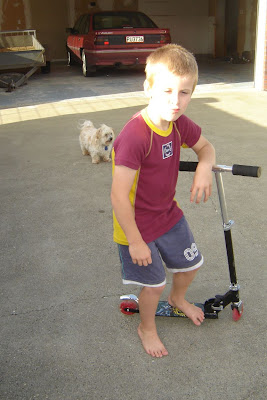