A couple of recent photos:
Pedro 'laxing. It's a dog's life really. 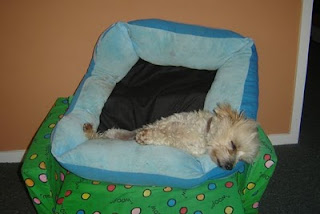 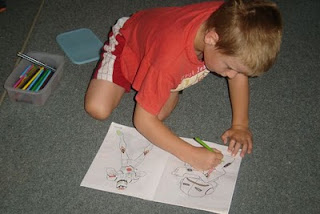 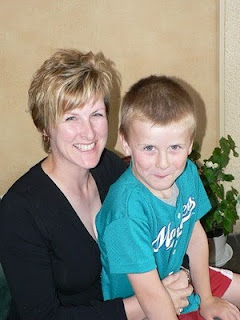 Tyler and transformer (don't ask me which) 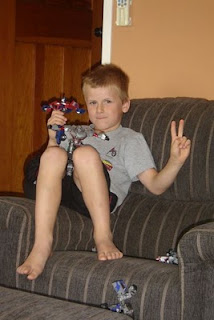 Tyler started school swimming lessons today, he goes every day for a fortnight. He was quite excited about it all especially using the kick board. He has started throwing philosophical/religious questions at us every now and again - the latest round was about dying (!) - I guess we have to expect that given that he attends a Catholic school. And there are other unexpected things he brings home from school - yesterday I was startled by him exclaiming 'Holy crap!' about something. That one has been nipped gently but firmly in the bud! Last week he was 'Handwriter of the Day' for his class (first time) , he learnt to skip with a skipping rope, he went up a reading level and he put his face under water calmly. All of that earned him the right to choose a 'treat tea'.

We are Chris-less at the moment as he is in Auckland at the Touch Nationals. He's playing with the Otago team.

My choir (A Capella) was filmed by Praise Be last week, along with a number of other Southland choirs. We did 2 Christmas carols which will be shown later in the year (obviously), the a capella ending to Karl Jenkins 'The Armed Man' which will be played at Anzac and  David Childs 'The Lord is my Shepherd' which will be shown in the 11 April programme. I got to play a flute part in this. Hope the nerves didn't show.
Posted by BellaDiva at 19:27